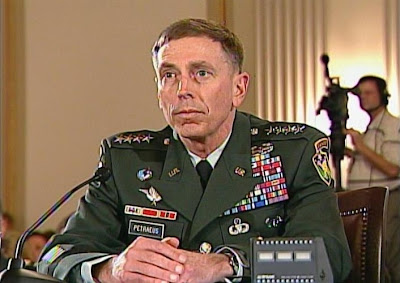 Mark Antony in the play Julius Caesar, stated "The evil that men do lives after them. The good is oft interred with the bones.". Today we see a self righteous public quite ready to inter the General, a man dishonored under some very dubious circumstances, and that brings to mind one of my all time favorite quotes: "Public opinion be damned!" I subscribe to the attitude found in that quote for the public is so fickle, so judgmental, and so easily manipulated.

Pause and take a good look at the General. There above his breast pocket is a set of Master Jump Wings. That means that he has spent more time suspended from a parachute than many who would judge him have spent in church. Almost concealed under his lapel is the C.I.B. Combat Infantry Badge. That tells me that he has shouldered a weapon and said "Follow me!" Men followed, and undoubtedly some died, but he was up front, while they followed his lead. Look at all of those ribbons between the wings and the C.I.B. Each tell of service to this nation.

Now, to cover up the actions of traitors, an indiscretion by this warrior has been unveiled and that indiscretion will properly be judged by his wife and God. None other has the right, in my humble opinion. To those who would judge, I offer these famous words. "Let he who is without sin cast the first stone."

So many are writing and showing videos that tell you the General was set up, and giving you all of the nitty gritty details that prove their point. Their point is made. You and I both know that Petraeus is being used as no more than a sacrificial goat. I shall avoid repeating their message and telling you what you already know, I simply hate following a beaten path. Instead I shall pursue, not the event itself, but the tactics that prompted the event and the ramifications of this tragic assault if it is allowed to continue, as per plan, on a servant of America.

I shall now go from a great warrior to a diabolical genius, and two more quotes. Rules three and four from Saul Alinsky's "Rules For Radicals".

3. "Whenever possible, go outside the expertise of the enemy. Look for ways to increase insecurity, anxiety and uncertainty. (This happens all the time. Watch how many organizations under attack are blind-sided by seemingly irrelevant arguments that they are then forced to address.) ...
This is being enacted before our eyes and it is working, as per plan. America was putting pressure on the media to confront the Benghazi issue. Suddenly, we were blindsided, and a new and irrelevant topic was interjected, one that the media thrives on, a sex scandal involving an American hero is now on the front page. As I stated, Alinsky was a diabolical genius, and his followers learned well.
4."Make the enemy live up to its own book of rules ... You can kill them with this, for they can no more obey their own rules than the Christian church can live up to Christianity."

We are being killed with this rule. The media are not discussing Obama's gay affiliations in Chicago, nor are they discussing JFK's numerous girl friends, or the stains on Monica Lewinsky's dress. They have a conservative, a Republican, a military hero to castigate, and like Soros' puppets, many of our own people are tossing Petraeus under the proverbial bus. Public opinion be damned! I see no way to justify sacrificing this man to feed the smoke screen of Obama's deceptions. Let the General and his wife work it out. We have other issues to concentrate on. 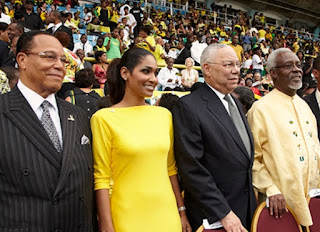 Allow me, if you will to present you with two Generals, two betrayals, and two different degrees of danger to America. First General Petraeus with his infidelity to a marriage. A tragedy to be sure, an all too common tragedy, but that is a personal issue that is being politicized, and I fail to see where it presents any real degree of danger to this nation.

Then we have General Colin Powell who has, as of late, grown quite friendly with Luis Farrakhan, leader of the a militant black Islamic movement, hell bent on subjugating the white race and ruling America. Now, I must ask where is the clear and present danger, and what is the media choosing to focus on. No General is perfect but some are loyal to America, while some are not.

I do not follow the mainstream media at all but would bet that in the near future, as part of their smoke screen, more American heroes will be tossed onto the fire to continue the distraction from Benghazi. A few I might suggest: General Eisenhower, while in Europe during WWII had a girlfriend named Kay Summersby, Benjamin Franklin was a well known womanizer both here and in Europe, and Thomas Jefferson owned slaves, one of whom was named Sally Hemings, who was the mother of his children.

Should we reject the good these men did because they were mere mortals? Should we turn on General Petraeus because he failed to be a saint? I for one have never expected a saint to lead men into combat. I expect him to kill this nation's enemies, not save their souls. So far I am under the impression that he has done that job quite well.

And what of other Generals and Admirals who have served us well? This is where it gets really scary. Can you in all honesty expect these warriors to have all been squeaky clean all of their lives. If we allow Obama's plan to play out, and we, in our indignation, turn our backs on Petraeus, then we open the floodgates of blackmail and extortion that will come crashing about these men.

Obama is planning to cripple this nation and bring it to its knees. If we throw Petraeus to the wolves we throw the entire military with him, and our military is the last bastion of patriotism and hope for a just America. These men and women in the uniforms of flag officers know far more than we about what Obama is doing. If we forsake them I guarantee you that will be the greatest betrayal of all, for in doing so we betray ourselves. These warriors are only human. Be thankful for what they have contributed, and a little more understanding of their shortcomings.

Since Obama entered office we have been beset by numerous choices and crossroads, usually veiled by smokescreens and lies. Once again we stand at a crossroad and the choice facing us is do we dance to the tune of the puppet masters and turn on our own, or do we stand by a man who admits he erred. In my mind we have a choice to either stand by him, or do as Obama whats us to do, and stand down.

Good essay as usual Danny ! - one section that jumped out at me was the news that Colin Powell is playing footsie with the Nation Of Islam - though he would probably issue a "plausable denial" re this ; a sinister development given his position and access to knowledge and sympathisers - do you have any further links to this you could put up please ?

The way things are going defy all logic & comprehension. Of course, we know that none of this would be possible if we had a truly free press. Without such an organization, we are doomed to having lies & treachery either spun or buried. The average person has neither the time not the will to dig for the truth & thus remains in a state of blissful ignorance.

The other day I was helping to wrap Christmas presents for the disabled children's Christmas party. Guess what they were talking about--yup-- Dancing With The Stars!!! The stereotype IS the reality. I swallowed the bile rising in my throat & kept my mouth shut. These were all very goodhearted, lovely ladies who were completely clueless & I am convinced that they are beyond reach....

Your last sentence indicates maturity and wisdom. There are some, that no matter how you try, are beyond reach. There is nothing we can do for them. They will only be a hindrance in days ahead..

Unbelievable, that Farrakhan and NOI can have any credibility and be allowed to appear in public without shame.  What next, the Nazi party?  An Apartheid Party?  I thought it was bad enough that the openly racist Mohammed Ali was in the opening ceremony!

Shame no longer exists. It has been replaced by political correctness and tolerance.