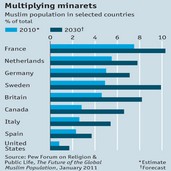 This room is to record where a people lose control over their society by an enemy using demographics as a weapon.  This is also a breach of the 4th Freedom of 4F: Freedom from voter importation.

Nation take-over is a defined strategy of Islam, voiced from the first Hadith of Mohammed upto present day Erdogan of Turkey.  It takes two forms:

"Our sufferings today are the prelude of those you, Europeans and Western Christians, will also suffer in the near future. I lost my diocese to Islam. The physical setting of my apostolate has been occupied by Islamic radicals who want us converted or dead. Your liberal and democratic principles are worth nothing here. You must consider again our reality in the Middle East, because you are welcoming in your countries an ever growing number of Muslims. Also you are in danger. You must take strong and courageous decisions, even at the cost of contradicting your principles. You think all men are equal, but that is not true: Islam does not say that all men are equal. Your values are not their values. If you do not understand this soon enough, you will become the victims of the enemy you have welcomed in your home.”
Emil Nona, Chaldean Archbishop of Mosul.

Muslim Enclaves in the UK

How Labour Turned London into a Foreign City

Agenda 2030: the Barcelona and Marrakesh Declarations

Immigration and Demographics in the UK and Europe

Not All Immigration Is Good.

Invasion of Europe: The ship is going down - by Sam Gerrans

More than 4000 children referred for 'deradicalisation' (and most refuse it)

With Open Gates: The forced collective suicide of European nations

Ecosystem Damage - Deliberately or by Negligence

You need to be a member of Kuffarphobia via Immigration & Demographics (hijra) to add comments!

Comment by paul collings on May 14, 2021 at 17:11
The whole western world is well in its way to be called the greatest bunch of Lemmings in History.
But it's already the case that defending yourself, whether your Jewish, or just white, is considered Racist.
The Morons demanding we destroy our civil society don't seem to understand this will include them. For starters history has shown a victorious people hate the Traitors that helped them far more than an enemy that stood with its own.
Everyone hates a Traitors.

To think that I once wasted time trying to protect this society, with a people that welcome their smiling but ruthless invaders, and a state that caves at minor signs of resistance to its laws.

Its not that we have to produce more children, we have to deport more foreigners.

[via email from Britain First]

Demographics is the study of change in any given population, taking into account indicators such as race, gender, age and so on.

By monitoring demographics, we can see if the composition of a population changes, or if the average age increases, to give a few examples.

Britain is heading for a demographic disaster.

Demographic disasters rarely reveal themselves over time gradually - they creep up slowly and before you realise, your country is depopulated and your nation on the verge of extinction.

The importance of demographics supersedes everything else.

Unless a nation repopulates itself by bearing a certain number of children, it will wither and disappear.

This is not someone’s madcap opinion – it is an immutable fact.

To simply maintain itself, without becoming extinct, the British people must maintain a minimum birth rate of 2.1 children.

The 0.1 is a 5% buffer that takes into account deaths, homosexuality or infertility, whereas the 2.0 is intended to replace both adults.

A birth rate of 2.1 will mean that, on average, the population will remain relatively static.

According to the American Central Intelligence Agency (CIA) the projected birth rate for the United Kingdom in 2011 will be 1.9 children – but this figure doesn’t speak the whole truth.

The figure of 1.9 as given by the CIA includes non-indigenous ethnic groups (Muslims and Africans) who have much higher birth rates than the native British people.

The birth rate for the native white British people is estimated (being generous) at 1.4, but even then, a certain degree of further scrutiny is required, the difference between generations.

An estimate of the birth rate for the latest generation of Brits is even lower, at 1.0 children.

While these figures can be confusing, there are ways to simplify the situation:

With a replacement rate of 1.0 children per British female, the next generation of Brits appearing over the next 25 years will be half the size of the last generation.

And if the next generation maintains the 1.0 replacement rate, that means that within the next 50 years (roughly two generations) the population of native British people in these islands will decrease by roughly 60-75%.

During this period of rapid depopulation, the foreign communities in Britain will be increasing rapidly.

The Muslim birth rate, for example, is around five children per female.

Ethnic minorities will become the majority, and the British people will become a minority.

At a certain day in the future, we British will lose control of our homeland.

We will be outvoted, outnumbered and oppressed.

I find this story so pathetic. With rousing music the plucky British Navy sees off the Russian invaders. Except that they just escorted the Russian ships, which were just passing thru minding their own business, and could take on the British ones anytime if they wanted.

And what about all the rapefugee invaders coming to our shores every day? If our British Navy finds them, it probably takes them on board and gives them a taxi ride to the shore - or calls a coastguard boat to do it for them. Ridiculous.

https://www.weforum.org/agenda/2018/06/90-of-plastic-polluting-our-...
90% of plastic polluting our oceans comes from just 10 rivers
Eight of them are in Asia: the Yangtze; Indus; Yellow; Hai He; Ganges; Pearl; Amur; Mekong; and two in Africa – the Nile and the Niger.
(Next time you are bullied and accused of destroying the planet, ignore it. It ain't people of European descent doing it. We are the ones; caring about the planet, cleaning up the mess, paying for and taking on the burden of nations that just dump their garbage into rivers).
We should not be importing people from these countries, they take their attitudes with them. Those countries with exploding populations are never going to develope. 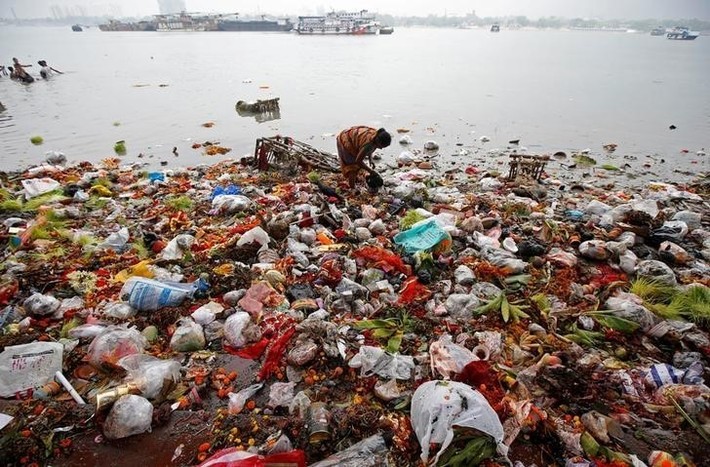 There is a simple and obvious truth- that the main element of anyone's identity and self-awareness is their race. So let's start being honest, it is all about race. A multi-racial society and nation has never worked and will never work. Everyone is a racist. Some are nice and some are nasty, but as we cannot live together peacefully we must live in separate countries. That is the only way that we can create stable and prosperous nations.