The Islamic Destruction of Tempes in Arcot & Vellore (India, 1669)

Exhibit No. 9: General Order for the Destruction of Temples. (9th April 1669) 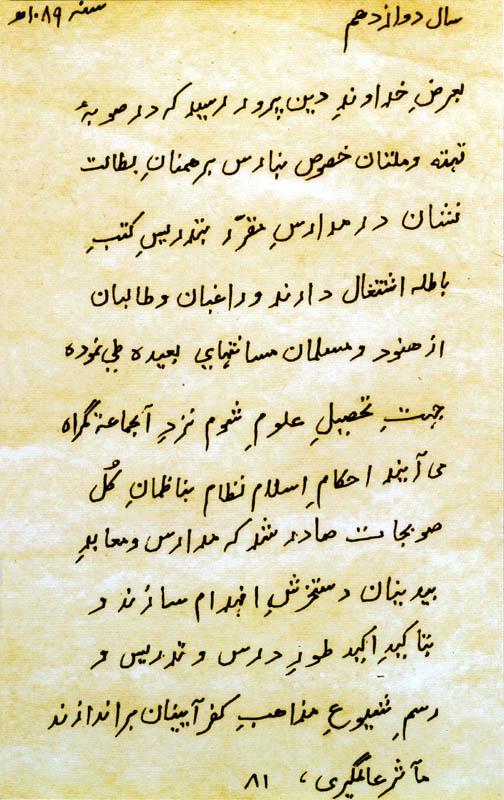 “The Lord Cherisher of the Faith learnt that in the provinces of Thatta, Multan and especially at Benaras, the Brahmin misbelievers used to teach their false books in their established schools, and their admirers and students, both Hindu and Muslim, used to come from great distances to these misguided men in order to acquire their vile learning. His Majesty, eager to establish Islam, issued orders to the governors of all the provinces to demolish the schools and temples of the infidels, and, with the utmost urgency, put down the teaching and the public practice of the religion of these unbelievers”.

Exhibit No. 10: General Order for the demolition of Hindu Temples. On the 9th April 1669, Aurangzeb “eager to establish Islam, issued orders to the governors of all the provinces to demolish the schools and temples of the infidels, and, with the utmost urgency, put down the teaching and the public practice of the religion of these unbelievers

In the sketch, the artist has shown the destruction of the temples of Somanath, Jagannath (Puri), Kashi Vishwanath (Banaras)and Keshava Rai (Mathura), which were all highly venerated shrines, as symbolic of Aurangzeb’s ideal of thorough destruction of Hindu temples. In the centre is a portion of the infamous order of the 9th April issued by him.

The Chennai police on Thursday detained three women associated with an art exhibition after forcing them to close down the show, where a French artist had displayed his paintings on Mughal emperor Aurangazeb.

The police took Saraswathi (65), Dr.Vijayalakshmi (62) and Malathi (47) to the Thousand Lights station at around 7.30 p.m. for enquiry into charges of assisting an exhibition by French journalist Francois Gautier at Lalit Kala Akademi’s (LKA) Regional Centre on Greams Road. They were detained in the station for half-an-hour.

Earlier in the day, tension prevailed on LKA premises when the police, Hindu Munnani president Rama Gopalan and Prince of Arcot Nawab Mohammed Abdul Ali visited the exhibition. The visit of the police came in the wake of three letters including one from an advocate Mr Zainudeen to Lalit Kala Akademi stating that the exhibition would disturb communal harmony. The police initially suggested removal of two pictures depicting demolition of Keshava Rai temple in Mathura and that of Somnath temple by the armies of Aurangazeb. 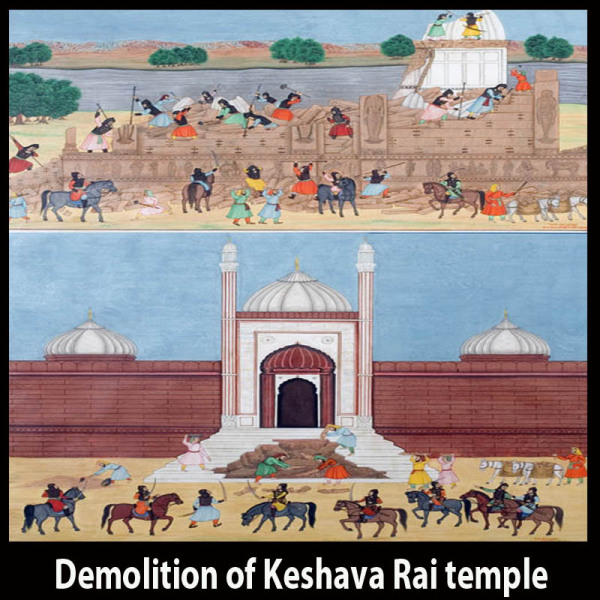 Talking to this newspaper, Ms Saraswati (65) said, “The police was rude to us. They asked us whether we were terrorists. We were detained in the station for more than half an hour and they did not allow us to contact our family.” Ms Malathi said, “The police entered the exhibition hall at 7.30 pm and threw away some paintings.” However, the police and LKA officials denied breaking any art pieces put up at the exhibition. 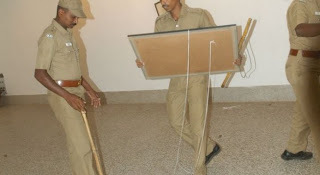 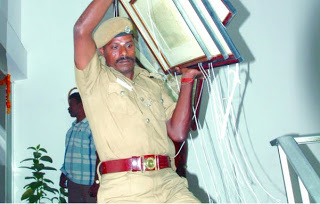 The Nawab of Arcot 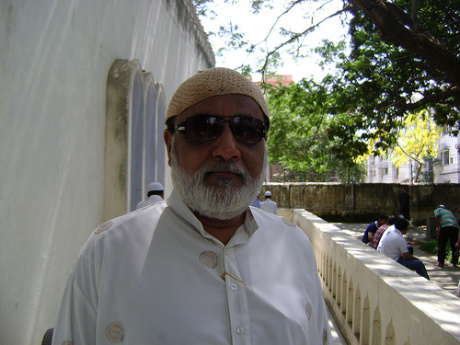 He insisted that the FACT-India exhibition of paintings of temple demolition, shown in the Lalit Kala Akademi in Chennai on March 3 to 7, 2008 amounted to “fabrication and distortion of history” and that Emperor Aurangzeb had never done anything to harm the Hindus. In fact the Nawab’s own ancestors had destroyed temples in Gingee, Arcot, and Vellore.

The Nawabs of Arcot were sectarian temple-breakers just like the founder of their dynasty, the religious bigot Aurangzeb. A quick perusal of Sita Ram Goel’s Hindu Temples: What Happened To Them, Vol 1, gives an extraordinarily long list of the Hindu temples destroyed or occupied in Arcot, the capital of the Nawabs, when they occupied the Hindu pilgrimage town in 1712. The list of temples destroyed or occupied by Muslims for Arcot and Vellore (Arcot is now part of Vellore city), and Gingee, the original capital of the Nawabs, reads:

Arcot was a city of temples before its occupation by Muslims:

Above is the list for Arcot, the capital of the Nawabs. The list for neighboring Vellore follows:

Shiva, you are amazing.  This kind of contribution is priceless.  I should point out that Chennai is in India, its the capital of Tamil Nadu state.  I thought that that police action must be taking place in Pakistan or Bangladesh, i.e. a Muslim country, but it is not.

Now wind forward to the banning of Spencer and Geller from entering the UK, and the attempted banning of Tommy from walking past the East London Mosque.  Notice any similarities?

'the exhibition would disturb communal harmony'

It takes a particularly mature society to look critically and objectively at its past.  Ibn Warraq speaks of one of the good qualities of the West is it ability to be self-critical.  At least the discussion is allowed as to what actually happened in history.

Yes Alan, there are similarities, also I note that T Robinson has just been arrested.