Muslims in Bologna have been attempting to destroy a 14th century painting show the Profit of 20% being dragged into hell on judgement day.

I was in Bologna last year, but didn't know about this.  I plan to go back and it will be at the top of my list of things to see.

Alan is now making a habit of refusing to distinguish between

Yes, it wasn't so deliberate, I just thought the term seemed appropriate.  Then I found something interesting.

We are conditioned to accept that term 'fascist' for certain uniforms and insignia and of course, anyone to the right of pure socialism.  But if you can break free of the conditioning, and just use it for the ideological form, then it is clearly more appropriate for the ones Joe lists.

So try this experiment, which I will enact in future when I can.  Take one of the articles here where typical fascistic behaviour is performed by Islamists or Leftists.  Post the article with the heading "Fascists goose step in military parade of new missiles" (Iran), or "Fascists execute another of their opponents" (Pym Fortyn), but leave out any specifics of who actually did it till the very end.  Then you will find that the article fits perfectly the fascist model, and its only our conditioned politeness about 'religion' or about the 'caring socialists' that is stopping us applying that term.  If you completely miss out any reference to the underlying people, its clear that you are reading an article about a fascist operation.  Try it! 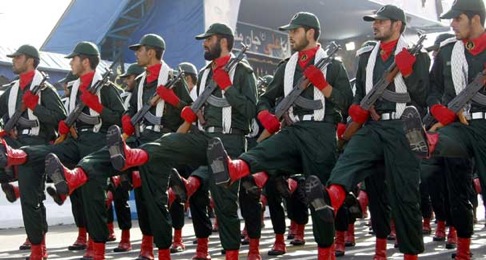 Fascists Goose Step alongside new missiles that can target Europe.

In speeches later, President Ahmadinejad boasts of his intention to destroy the Jewish nation of Israel at any cost.

That book explains not only that fascism was socialist and progressive (and that British and American socialists of the 1920s and 1930s even shared Hitler's belief in eugenics and enforced sterilisation), but also that the fascist/progressivist tendency is alive and well and we consider it to be liberal-left without noticing how close it is to the fascism of the 1920s.

I forgot to point out that the term 'Islamo-fascism' is counter productive and misleading.  People hear it and just think its some Islamophobic attempt to taint the beautiful peaceful 'religion' of Islam.

The point is that Islamic fascism is barely distinguishable from German fascism or Italian fascism, or the fascist thugs that took over Japan.  By sticking 'Islamo' in front of the word, you mislead the reader into thinking that its some strange but partially related variant.  Its not.  Its a mainstream repetition of the original, with a few slight changes.

Yes.  Perhaps the only qualification might be that islam is Ur-Fascism, proto-fascism, or the purest form of fascism.

Maududi is considered (by muslims) to be the greatest islamic thinker of the 20th century.  He was a profound influence on Hassan al-Banna, Said Qutb, and Ayatollah Khomeini.

Maududi said of the islamic state:

A state of this sort cannot evidently restrict the scope of its activities. Its approach is universal and all-embracing. Its sphere of activity is coextensive with the whole of human life. It seeks to mould every aspect of life and activity in consonance with its moral norms and programmes of social reform. In such a state, no one can regard any field of his affairs as personal and private. Considered from this perspective the Islamic State bears a kind of resemblance to the Fascist and Communist states. But you will find later on that, despite its all inclusiveness it is something vastly and basically different from the totalitarian and authoritarian states. Individual liberty is not suppressed under it nor is there any trace of dictatorship in it.

Maududi was presumably trying to put a positive spin on the islamic state.  Seen from an outside perspective though, this spin falls away.

This purest form of fascism has no dictator.  There is no suppression of liberty within it, because there is no liberty.

The unity which Mussolini's fascism attempted to forge is not even on the agenda.  All opposition will have been obliterated in the islamic state.  All and everything will have been enslaved to an ideology, thus requiring no dictator.  Fascism attempted to bind disparate interests together.  In the purest form of fascism there is no recognition of any interests beyond those of serving the propagation of the islamic state.

Islam is the longest surviving continuous political ideology in the history of mankind.  For example, Secular Democracy may have been invented before it, but it has existed in many different instantiations since then.  There isn't a continuous historical and geographical thread.

Although you are both right, the term can be confusing in use. Most people, like me, associate the term fascist with the far-right.

n (sometimes capital)
1. (Government, Politics & Diplomacy) any ideology or movement inspired by Italian Fascism, such as German National Socialism; any right-wing nationalist ideology or movement with an authoritarian and hierarchical structure that is fundamentally opposed to democracy and liberalism
2. (Government, Politics & Diplomacy) any ideology, movement, programme, tendency, etc., that may be characterized as right-wing, chauvinist, authoritarian, etc.
3. prejudice in relation to the subject specified body fascism
[from Italian fascismo, from fascio political group, from Latin fascis bundle; see fasces]

See also communism; government; nationalism; politics.
anti-Hitlerism
the principles and practices of people who worked to dissolve Hitler’s dictatorship and fascism.
Bundist
a member of the German-American Volksbund, a U.S. pro-Nazi organization of the 1930s and 1940s. — Bund, n.
Falangism
the doctrines of the Falange, the fascist party of Spain. — Falangist, n.
fascism
1. the tenets of a centralized totalitarian and nationalistic government that strictly controls finance, industry, and commerce, practices rigid censorship and racism, and eliminates opposition through secret police.
2. such a form of government, as that of Italy under Mussolini. — fascist, n. — fascistic, adj.
Hitlerism
the tenets of German fascism as developed by Adolf Hitler; Nazism. — Hitlerite, n., adj.
Nazism
the German form of fascism, especially that of the National Socialist (German: Nazionalsozialist) Workers’ party under Adolf Hitler. — Nazi, n., adj.
Neo-Fascism
the post-World War II rise of a movement whose principal aim is to incorporate the doctrines of fascism into existing political systems. — Neo-Facist, n.
putschism
a method of revolution or overthrow involving secret planning, suddenness, and speed, as Hitler’s 1938 invasion of Austria. — putschist, n.
Rexist
a member of the Belgian pro-fascist party of the 1930s.

Phillip, it just goes to show how successfully the left have managed to shift the socialist Mussolini and the socialist Hitler over to the right.  At the point of Mussolini's execution, his acolyte Bombacci (a Leninist) shouted "Long Live Socialism.  Long Live Mussolini".  http://eddriscoll.com/archives/012661.php

That fascism and national socialism are right-wing is probably the greatest lie of the 20th century.  Who was it who said: if you repeat a lie often enough it will become the truth?  Some attribute it to Lenin, others to Goebbels.  Same difference.

a. A system of government marked by:
b. A political philosophy or movement based on or advocating such a system of government.
2. Oppressive, dictatorial control:  Does this remind you of anything?  Pakistan?  Sudan?  Saudi Arabia?   Afghanistan? Iran?  The changing Egypt?  The changing Turkey?
Islam and the Islamic states perfectly fit the definition of fascism.  Its pointless turning it any other way.  Let people get confused at the beginning, as they are forced to question their conditioning and years of propaganda.  Eventually the conspiracy of lies will crack and people will wonder why they allowed a whole tranch of terrorists, criminals and those that simply hate them, to build command and control centres, and organise, within their midst.

It's not even worth giving the popular definitions of the word "fascism" any credence.  Orwell was pointing out in the 1940s that the word had no meaning in most uses, other than to say "nasty person, unlike me".  Those who define it and include racism as part of the definition have missed the fact that the Italian Fascist Party had many jewish members, and it was only when the Nazis took over control in Fascist-dominated areas that jews started to be rounded up and shipped out (e.g. in Greece).

In fact, with the jew-hatred, Islam is more like Nazism than Fascism.  One can see the Caliph as the historical Dictator.  Maududi was writing at a time when he wanted to extol the "glories" of an islamic fascist state in the here and now; he didn't want to have to say it needed the restoration of the Caliphate.  But since that is what is currently being talked about across north Africa (and indeed was what Indian muslims travelled to Britain in order to save in 1918), the absence of the Caliph Dictator is but a blink of an eye in the history of the islamic empire.