iEngage Re-Brands Itself as "MEND"

The organisation formally known as iENGAGE has undergone a Puff Daddy style re-branding and is from now on to be known as MEND.

The name change was probably necessary after they were exposed as an organisation that has:

• Defended hate preachers and protested their exclusion from the United Kingdom by the Government.

• Condemned David Cameron and Hazel Blears for breaking off relations with the Muslim Council of Britain, after Daud Abdullah, the Deputy Secretary General, refused to remove his signature from the Istanbul Declaration, which threatened terrorist attacks.

• Defended a senior Islamist activist who had written an article supportive of attacks on British troops in Iraq.

• Written to the Foreign Secretary to oppose the imposition of sanctions on Iran.

Some of you may recall that The All-Party Group on Islamophobiadispensed with their services after the above was revealed and MP’swalked out in protest of their involvement and the fact that an Islamist sympathiser that works for them had been issued with a House of Commons pass.

iEngage has been relatively quiet and now they seem to be back and the strategy appears to be to engage regional councils who may not be aware of their hate credentials. Furthermore, it appears that they have had an injection of cash as they are recruiting heavily. They currently claim to have a team of eleven people with a further three vacancies.

The current staff includes amongst others

1. The Founder and Managing Director – Sufyan Ismail who is also is one of the founding trustees of 1st Ethical Charitable Trust and loves topromote the hate preacher Hatham al Haddad.

• Muslims should disown and cut all ties with family members who leave Islam. Friends who have left the religion should be ‘boycotted.’ Those who choose to leave Islam (even without attacking the religion or the state) may be executed in an Islamic state.

• Non-Muslim political systems are ‘filthy,’ though it is permissible to vote for a kafir in order to prevent a worse kafir system from taking power. Muslims should prevent non-Muslims from ruling any country with a law other than the shari’ah. Extramarital affairs are ‘normal’ in the non-Muslim community – this is down to their ‘belief system’ and ‘moral decline.’ It is sometimes recommended or obligatory to insult the ‘Gods of the kuffar’ – if a Muslim believes that a non-Muslim will respond to this by insulting Allah then this should be avoided. Non-Muslims living under an Islamic state should be aware of the ‘consequences’ for disbelieving in Allah.

• A system of ‘slavery’ is superior to systems of the West when dealing with prisoners of war. Only non-Muslim prisoners of war can be taken as slaves. A ‘master’ may engage in sexual relations with a female slave. If she becomes pregnant and bears a child, she can no longer be sold on to someone else.

• Muslims are losing their identity through their involvement in elements of the ‘Western lifestyle,’ such as Christmas.

• Jews and Christians should be ‘forced’ to pay the jizya. Jews are the ‘descendants of apes and pigs’ and one of the ‘armies of the devil’. Money, media and alcohol are ‘weapons’ of the Jews. Al-Haddad has complained that synagogues and churches feature alongside mosques in children’s textbooks.

• It is forbidden to join Christians in celebrating any of their festivals. To do so is worse than ‘committing suicide.’ Parents who encourage their children to join in are ‘evil.’ There is no basis for interfaith dialogue, as other religions do not believe in the Prophet Muhammad (SAW).

• Suicide bombing is part of defensive jihad and therefore a ‘commandment’ of Islam. Those who condemn suicide bombing are committing a ‘betrayal’ and ‘serious treason.’

• ‘Pro-active’ Jihad includes fighting non-Muslims to establish the law of Allah. This can be given the go-ahead once an Islamic state has been established, including in Britain. Islam can be established ‘by the sword’ once ‘conditions’ have been met. The Islamic state should ‘initiate a fight’ with the non-believers in order for Islamic law to be dominant.

• The ultimate aim of all Muslims is to see Islam governing the whole world. The world must not be governed by any other law than the law of Allah. Muslims should rule the entire planet with Islamic law. The ‘Islamic Republic of Britain’ will only be possible if Muslims use the current political system to their advantage.

• It is a ‘must’ for all Muslims to establish hudood punishments.

• A husband should not be questioned why he hits his wife. ‘Smacking’ your wife can be overlooked. If a woman is afraid that her husband will become violent and that her safety is in danger, she should not call the police as the husband will not tolerate this and it is an insult to his manhood.

• Those found guilty of engaging in extra-marital sex should be punished in the ‘harshest manner possible’ – stoning to death.

• There is no minimum age for girls to get married. Children studying for GCSEs are old enough to get married. If Muslims are ‘careful of the legal issues’ and can avoid ‘non-Islamic laws’ and not put themselves in ‘trouble’, marrying ‘the younger the better’ is advisable in Britain

• Female circumcision is recommended. It is a “virtue” or an “honour” for women and is better for the husband.

• Women enjoy their husbands being superior to them and should obey them. If a husband orders his wife not to attend Islamic lectures or circles he ‘must’ be obeyed. Muslim women should attack ideas such as liberalism and freedom, and should not work. Women are recommended to cover their face and should not worry about integrating into wider society. The West is ‘humiliating’ and being ‘unjust’ to women as women are now employed as mechanics and dustwomen (sic). A man can ‘command’ or ‘force’ the female members of his family to wear niqab.

• Azad Ali sued the Daily Mail for suggesting that comments on his blog showed that he was “a hardline Islamic extremist who supports the killing of British and American soldiers in Iraq by fellow Muslims as justified”. He lost.

• Azad Ali wants Ismail Haniyeh – leader of the genocidal antisemitic terrorist organisation, Hamas – to be the Caliph of the next Caliphate.

• Azad Ali admired the Al Qaeda and recruiter Anwar al-Awlaki and had this to say about him on the Islamic Forum of Europe’s blog: “I really do love him for the sake of Allah, he has an uncanny way of explaining things to people which is endearing.”

• Azad Ali’s show on the Islam Channel was sanctioned by OFCOM for its failure to maintain due impartiality in its coverage of the Israel-Palestine conflict, including in relation to comments on Mahmoud Abbas. That’s because he’s a Hamas supporter.

• When an undercover reporter for Dispatches exposed Azad Ali’s political views, he threatened them on his radio show, saying: “We’ve got a picture of you and a lot more than you thought we had. We’ve tracked you down to different places. And if people are gonna turn what I’ve just said into a threat, that’s their fault, innit?”

IEngage still exist as an entity and can be viewed on the Companies House website as currently having two Directors. Mohamed Ali Harrath and Sir Iqbal Sacraine. More on these two here and here.

It is not clear at this stage where MEND is receiving its funding, some sources are indicating that the EU has given them some of our cash to spend. But what is apparent is that they have realised that Westminster or Whitehall are not going to provide dividends, although the Department for Communities and Local Government under the guidance of the “Hopeless” Baroness Warsi seems to have no qualms about sharing a platform with them, although this goes against Cameron’s promise in Munich when he stated clearly that the Government will not share a platform with extremists. So they have decided to work on local councils such as Luton where they were discussed recently as a potential partner.

Isn't Azad Ali also a leader of UAF? Some of those quotes of his views perfectly replicate that UAF's leader's position. And his name sounds similar.

Yes, it's the same guy. I'm surprised that Harry piece doesn't mention it because they also focussed on his UAF position. 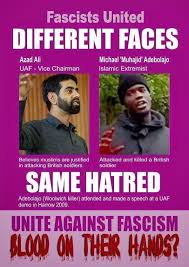 iEngage/Mend/Azad Ali (he of UAF) claim to be able to influence outcome in 30 constituencies in next General Election.

Reports that MPs offered large amounts of money to sign up to "Muslim Manifesto".

I think it is becoming clear that Muslims really don't need to use violence to take over democratic society.  By acting as a unified self-recognising group with a defined agenda, they will be able to seize control of our country by purely democratic means, if they want; and by the way, that is exactly what Hitler boasted of doing in Germany.

People need to wake up and recognise this fascist, discriminatory ideology for what it is, and call it as such.