This forum will be used to collect news articles and commentary on the triple bombings in Brussels of 22 March 2016.

Patriots in Belgium should organise a mass rally to demonstrate/retake Molenbeek asap.

...another thing I noticed about the news reporting on the Brussels attack is that they have blurred out or not shown footage of the bodies and injuries, one woman spoke of seeing people with their heads blown off - if this was footage of palestinians they would have shown it - dead westerners are'nt worth so much.

Well, I guess if you can't control people wearing political symbols, who don't even have the right to belong in your country as citizens, then there's no way you'll be able to control Jihadist Muslims (NTDWI), that want to kill you and destroy your society.

Isn't it ironic that the headquarters of the EU, the totalitarian organisation that imposes its project of population replacement on the rest of us, gets it airport and tube system blown up, then the whole city in lockdown?

One wonders, were there any senior EU politicians or bureaucrats in the airport at that time? Were there any injured or killed? When they are eventually allowed back into their heavily fortified building, will they make a new directive to speed up the imposition of muslim deserters, criminals and 'children' on us, since we've obviously annoyed ISIS by slowing it down and arresting Abuslam? Because we all know that if you are nice to Islamic Fascists, they'll be nice back, right?

Erdogan offers help to Brussels after his ominous warning of terror threat to city
https://www.rt.com/news/336769-erdogan-warning-brussels-attacks/

Belgians reporting on how Muslims were standing round in Brussels laughing and dancing after the attacks.

Teacher who tweeted about students in his class laughing and dancing was visited by the police and told not to write tweets like that again.

I saw other tweets from schoolkids who were tweeting in Dutch (so could be from Belgium or Holland) about how they couldn't wait to leave school, to get away from the Muslim kids who cheered when they heard of the attack in Belgium.

The chattering classes laughed at Americans saying there were no-go zones in Britain. There are clearly no-go zones in Brussels, over which the Belgian state has lost control. Here's The Spectator waking up to that.

Brussels has a tortured history of inadvertently harbouring terrorism cells, stretching back to the 2007 Madrid bombings. Its suburban neighbourhoods, such as Molenbeek, provided the command and control hinterland for the Paris attacks. Safe houses, logistics planning, weapons, escape routes and other resources were distributed and coordinated from Molenbeek via a web of support networks. The lion’s share of Belgium’s 600-700 foreign fighters have roots in Molenbeek. Disenfranchised, poor and plagued with an organised crime endemic, Molenbeek has become a hotbed of radicalisation.

Isis and other jihadist groups are establishing underground networks and terror cells in areas like this, which can effectively support mass casualty terrorism. Their ability to find physical havens amongst sympathetic communities is a massive game changer in the jihadist terrorism strategy. Salah Abdeslam, for example, who carried out logistics planning for the Paris attacks and who was recently captured in Molenbeek, was said to have moved relatively freely around the suburb without much scrutiny from the local community.

Discussions on 4F from 2010 onwards about how Molenbeek is an Islamic enclave over which the Belgian state has lost control. As I keep saying, if this was the stock market we'd be making money hand over fist. Maybe we should be working out the odds of the key issues and placing bets at Ladbrokes.

How IS laid out its planss to export chaos to Europe ; https://richarddawkins.net/2016/03/how-isis-laid-out-its-plans-to-e...

Belgian riot police use water canon on "far right" protestors who turned up to peace march despite cancellation ; http://www.dailymail.co.uk/news/article-3511398/Riot-police-water-c... - not sure who the protestors were, but it sure makes a change from a bunch of sobbing hippie leftovers singing crappy John Lennon songs !

Another bit of state propaganda from the Daily Mail.  They keep going on about Nazi salutes: rubbish.  They they complain how the behaviour is inappropriate: yes, like its inappropriate to protest over the killing of Lee Rigby, we should just quietly let it fade into kuffar history.

'This is our home' and 'The state, Daesh accomplice,' the hooligans shouted in unison, using an alternate term for the ISIS that claimed Tuesday's suicide bombings.

Its all lies.  This is why so many people hate the press.  And that chant is so true.  The state is the accomplice of Islam.
Note the demo style police in these two photos.  The policeman with the cosh on the left, has removed his red armband.  I expect we'll see similar units being formed over here soon.  Then the police can snatch demo organisers and whisk them away before the crowd realise what is going on. 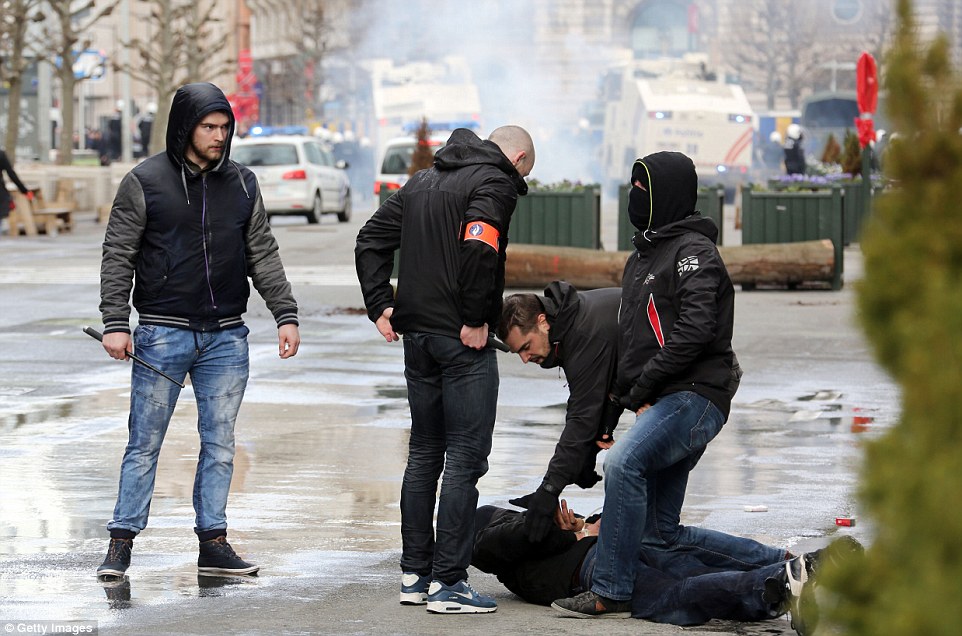 Here, the policeman is firing pepper spray to stop others coming to the aid of the guy they've got on the floor.  Notice how relaxed the police are, even though surrounded by tens of opponents, they aren't worried at all.  But they can see that those others aren't organised, are not able to act as one. 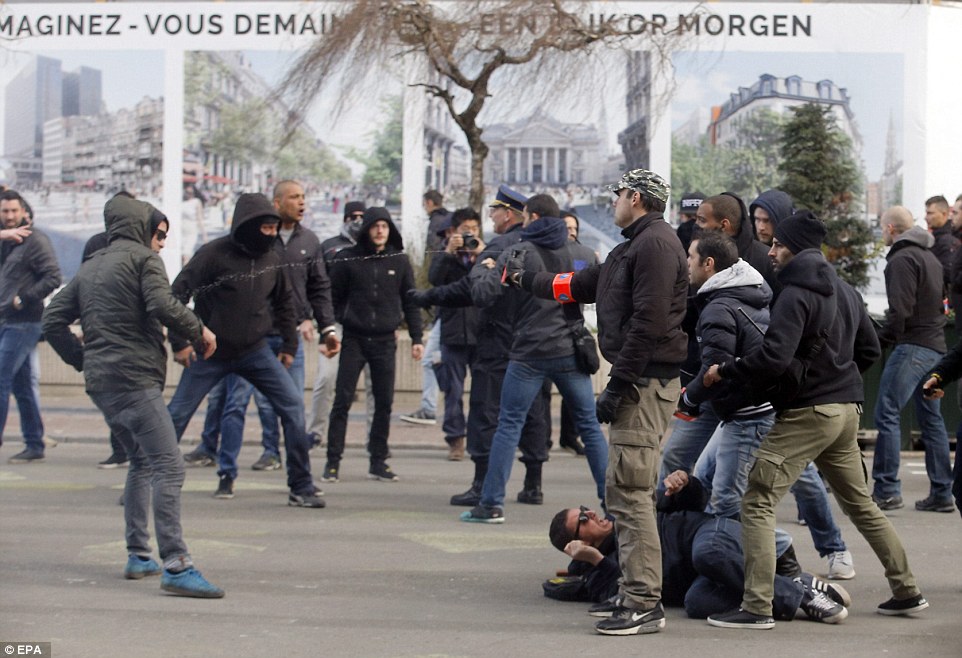 A professional restraint applied to this demonstrator: Having those massive water cannon makes tactics easy for the police:

Riot police with shields corralled the hooligans before dispersing them with high power water jets, and marshalling them onto trains out of the city

That is, push the demonstrators up against a wall or into a cul-de-sac, then blast them with water to take away their enthusiasm, then lead the docile mass to the exit when they've had enough.

The fascist left will be chortling with glee over this.  They don't seem to realise that the next despots that take control, will be using exactly these excellent tools to keep everyone suppressed, whether left or right.  The next power system will not be about socialism v. the free market, in just the same way that the current US election is no longer about political differences.  It is about cultural differences (thank you, Milo), and who can marshall the most money and power.  Similarly, then next despots of Europe will be gang leaders, and their agenda will be focussed on rewarding those who belong to their tribe.  It will be a re-run of Saddam in Iraq, Assad in Syria, and just about every country in Africa.

BBC accuses hooligans of hijacking demo - http://www.bbc.co.uk/news/world-europe-35907469 - the fact is that it is the left and the state that have hijacked the protest and channeled it into meaningless narratives, most of the public in Belgium and Europe and the UK are experiencing a seething,silent anger over islamification.

ISIS crucify priest in chilling Easter execution after he was kidnapped from old people's home
http://www.mirror.co.uk/news/world-news/isis-crucify-priest-chillin...$category%20p$2

It's only a crucifixion, for Christ's sake, does anybody even remember what that arcane remnant of antiquity is now?  No, what we should really be worried about are those far right extremists, who have disturbed the sanctity of the memorial in Brussels.  Then we can all crawl back into our cowardly yellow skins and congratulate each other on how brave we are.