This topic will of course occur in many other areas, like with the grooming gangs and the persecution of Tommy Robinson.

But there are other examples of persecution and corruption when it is not part of one of our other forums, so I figure it is worth capturing them here. 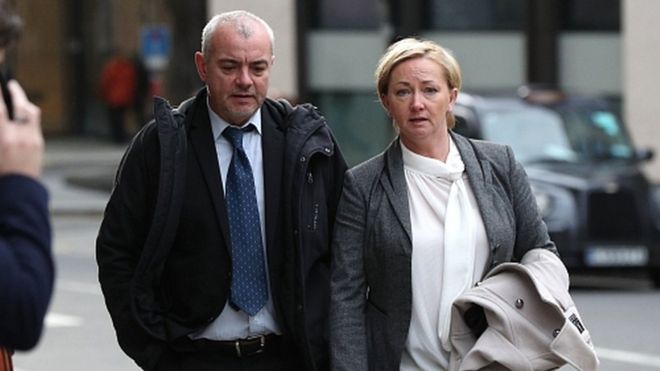 Two police officers who scuppered child abuse investigations through laziness have been found guilty of misconduct in a public office.

Patterson was found not guilty of one count and the Old Bailey jury was unable to reach verdicts in a further charge against each.

The pair will be sentenced on 3 May.

The allegations against the officers, who now live together in Colchester, came to light when performance reviews were carried out into the child abuse investigation team in which they worked.

Prosecutor Alexandra Healy QC had told the jury the motivation of the pair - who at the time were having an affair - appeared to be "a combination of laziness, self-preservation and a cynical disdain for complainants in child abuse investigations".

Their conduct was "beyond incompetence" and not down to a "lack of resources" or "insufficient investigative manpower", she said.

Patterson was accused of ditching work to get a manicure and have a four-hour lunch at a Chinese restaurant with her married lover Pollard.

When she forged a document to shut down one investigation, Pollard described herself as his "deceptive partner in crime" in flirtatious emails, jurors heard.

The pair denied wrongdoing, citing administrative chaos at the child abuse unit in north Essex where they both worked.

The convictions bring to a close a four-year corruption probe into the Essex Police unit by the neighbouring Norfolk force and the police watchdog.

Thirty officers, some now retired, were investigated and 296 Essex child abuse cases looked at, of which 55 were referred to the Independent Office for Police Conduct (IOPC).

The defendants were the only ones to face criminal charges, but a third officer was sacked for gross misconduct last year.

Five officers resigned or retired when the investigation began and two officers who were found to have a case to answer for gross misconduct had left the force before action was taken against them.

He said: "Today's trial has highlighted that between 2011 and 2014 we let a number of victims and their families down.

"Those victims had suffered child abuse, one of the most heinous crimes imaginable."

For the above trial, we wonder how many of those child abuse cases involved Muslim grooming gangs. Here's another report - still  no details on the botched cases.

One officer was accused of ditching work to get a manicure

Patterson was even accused of ditching work to get a manicure and have a four-hour-long lunch at a Chinese restaurant with her married lover Pollard.

When she forged a document to shut down one investigation, Pollard described her as his "deceptive partner in crime" in flirtatious emails, jurors heard.

The pair denied wrong-doing, citing administrative chaos at the child abuse unit in north Essex where they both worked.

But prosecutor Alexandra Healy QC said their behaviour went "beyond incompetence" and could not be put down to insufficient manpower or resources.

The couple, who live together in Colchester, Essex, denied misconduct in a public office each between 2011 and 2014.

Patterson was found guilty of one charge and cleared of a second while Pollard was convicted of two charges of misconduct.

The jury was discharged from considering one more charge against each defendant which will lie on court file.

The convictions bring to a close a four-year corruption probe into the Essex Policeunit by the neighbouring Norfolk force and the police watchdog.

30 officers, some now retired, were investigated and 296 Essex child abuse cases were looked at, of which 55 were referred to the Independent Office for Police Conduct (IOPC).

The defendants were the only ones to face criminal charges, but a third officer was sacked for gross misconduct last year, it can now be reported.

The matter came to light in 2014 after a victim complained her signature had been forged - and misspelled - on a statement taken by Patterson.

While the defendant was on long-term sick leave, the case was reassigned and resulted in a conviction in 2015.

Pollard destroyed four indecent photographs of a complainant in another case while it was still being investigated, the court heard.

But giving evidence he said: "I believe I would only have destroyed them once a decision had been taken that the investigation was closed.

"Verbal authorisations were given all the time ahead of being written down.

"That happened more and more in the office. The gap between being told verbally and written down got wider and wider."

In another instance, Pollard failed to investigate an allegation of sexual touching by a teenager then lied by claiming no further action was to be taken, on CPS advice

It can now be reported that in September 2015, Pollard was dismissed for gross misconduct.

According to a report at the time, he accessed, copied and disclosed another officer's computerised application for a job promotion without the individual's permission and then disclosed it to another officer who was considering applying for the same post.

It is described as "a deliberate and flagrant breach of honesty and integrity".

In October last year, Detective Constable Peter Wood, who worked at the same unit was dismissed for gross misconduct for lying during a child abuse case.

A panel found that between June 2013 and August 2014, he failed to take appropriate steps to trace a suspect, he was also found to have made a dishonest entry on a force recording system and lied about a witness not being willing to provide a statement.

Following the convictions, Busola Johnson, from the CPS, said: "The two officers convicted today showed complete contempt for the positions they held.

"Through a mixture of dishonesty and laziness, Patterson and Pollard chose not to do their jobs to the standards the public is entitled to expect, and then lied repeatedly to cover up their failings.

"The crimes that they committed had the potential to undermine the trust of some of the most vulnerable members of our society.

"Patterson and Pollard had a responsibility to protect the public, and they failed in that duty."

“Today’s trial has highlighted that between 2011 and 2014 we let a number of victims and their families down.  Those victims had suffered child abuse, one of the most heinous crimes imaginable.

“At the conclusion of these court proceedings, on behalf of the force, I would like to reiterate our apologies to those affected – we are sorry.”

“As soon as we identified concerns we acted swiftly to ensure affected investigations were promptly reviewed and, where possible, perpetrators brought to justice.