(AINA) -- On June 12, only two day after capturing Mosul and other territories in Iraq, the Islamic State of Iraq and Syria issued a decree ordering the people to send their unmarried women to "jihad by sex." In the proclamation ISIS threatens to impose Sharia law on all who fail to comply with the decree.

Here's a translation of the decree, followed by the original in Arabic. AINA cannot confirm the authenticity of this document.

Here is the original proclamation in Arabic: 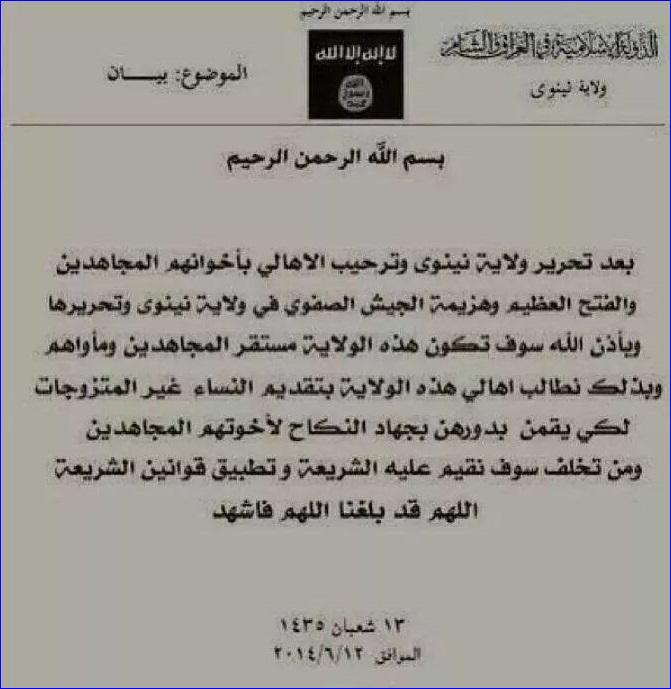 This statement from the Islamists (NTDWI) must not distract us from the fact that Islam is a beautiful religion which accords full respect, dignity and equal (half) rights to women.

'Hundreds' of Yazidi women killing themselves in ISIS captivity

Yazidis 'killing themselves in ISIS slavery'

Watch Connect the World at 5 p.m. CET this week for detailed reports on Yazidis enslaved by ISIS and their lives now.

Dohuk, Iraq (CNN)"Hello?" The voice is muffled, crackly, and barely audible, but the caller's desperation is clear: "Our situation is very bad and cannot get any worse."

On the other end of the phone, Ameena Saeed Hasan offers a lifeline: the chance to plot an escape from slavery at the hands of ISIS.

Every day, Hasan takes calls like this one. A former Iraqi lawmaker, she is now making it her mission to rescue as many Yazidi women as she can.

When ISIS first captured Mosul, Hasan thought the Yazidi on Mount Sinjar would be safe.

"We said 'Why would they come to Sinjar?'" she recalls. "There is no oil or anything. What would they take?"

But ISIS fighters did come to Sinjar. There may not have been any oil reserves for them to steal, but instead they took another of the region's most important resources: its people.

The Yazidis, a small Iraqi minority who believe in a single god who created the Earth and left it in the care of a peacock angel, have been subjected to large-scale persecution by ISIS, which accuses them of devil worship.

The United Nations has accused ISIS of committing genocide against the Yazidis.

The families of many of the missing have reached out to Hasan for help.

"People know me," she explains. "I am from Sinjar and also I am Yazidi. I know many people who were kidnapped. Some were my relatives, my neighbors, and they called me."

Together with her husband, Khalil, Hasan manages a network to smuggle the women out: she takes the calls, and Khalil makes the dangerous journey to the Iraq-Syria border to bring them to safety. 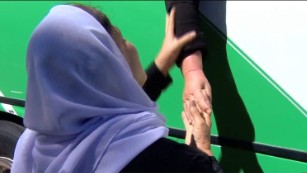 Former ISIS captives get chance for a new life 03:13

So far, the couple has rescued more than a hundred people. One of the first was a 35-year-old woman with six children -- all of whom had been captured, bought and sold in ISIS' slave markets.

In her desperate call to Hasan, she described what had happened to them: "They loaded two big trucks from the village and took them somewhere, I don't know where. When they were loading people on to the truck, a woman started arguing with them, so they killed her."

Despite her horrific ordeal, the kidnapped woman in this recording was one of the lucky ones -- she got out, eventually.

Others are not so fortunate. Hasan says many women, repeatedly raped and abused by their captors, have taken their own lives rather than wait to be saved.

"We just want them to be rescued," she says, through tears of sadness and frustration. "Hundreds of girls have committed suicide.

"I have some pictures of the girls who have committed suicide ... when they lose hope for rescue and when ISIS many times sell them and rape them ... I think there is maybe 100. We lost contact with most of them." 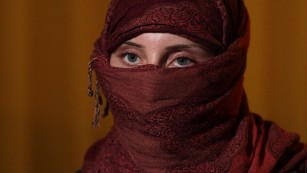 Yazidi girl: I was enslaved by ISIS leader 05:06

Hasan's work has been recognized with an award from the U.S. State Departmentfor the help she's given to ISIS slaves.

U.S. Secretary of State John Kerry praised her "courageous efforts on behalf of the Yazidi religious minority in northern Iraq, for insisting that the world give heed to the horrors that they face, and ... firm commitment to helping the victims and saving lives."

But she is haunted by the thought of those she could not save.

"I cannot sleep, I cannot forget what has happened to them," she says.

"[They ask] When will you rescue us? But I don't have the answer. I'm not a government. I'm not anything. I'm just people. It's very difficult."

Many have joined the fight against ISIS; instead of bombs and bullets, Hasan's weapon is her phone; with it, she offers hope, however distant, and a promise that help is coming.