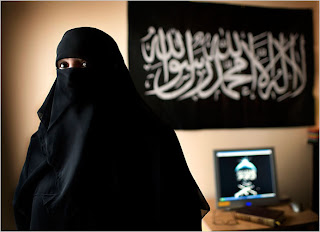 Every aspect of present-day Muslim culture that appears to be different from our own
is in fact already contained within our culture, it's just part of the
subset marked 'history'.

So all those primitive aspects such as tribalism, theocracy, punishment by amputations, repression of women, honor killings, blasphemy laws etc are quite familiar to us - but we've been there and done that and rejected it all centuries ago.

As with adolescent vandals, those who lack creativity can only express
themselves by destruction, and Muslims are very good at destroying the
products of other civilisations (known as 'Jahiliyya') .

If you look carefully at the process of Islamification in Europe, you'll see that nothing is being added (apart from babies and mosques), but much is being taken away. Almost every Muslim demand is culturally 'subtractive' rather than 'additive'. They want to remove pig statues, ban alcohol, curb free speech, and stop teaching art, music, drama, biology and other 'un-Islamic' subjects in schools.

The mere presence of Jihadists in the West reduces the quality of life, with security restrictions on travel, and kaffir women and children in Jihadist-infested cities unable to move and play freely for fear of sexual predators.

In contrast to the subtractive impacts of Jihadism on Western
civilisation, Islamic clerics in in Dar al-Islam are paranoid about the
addition of aspects of Western culture such as fashion, music, toys,
cinema, art, science etc to their own, which they refer to as 'Westoxication'.

So, no matter what the multiculturalists tell us, Islam cannot bring
'cultural enrichment' to the West - it can only bring cultural
impoverishment.

To say that Jihadist immigrants are worthless is to overvalue them. In fact they have a negative cultural worth, because
their attempts to Islamify the West are an attempt to reduce the rich
culture of a superior civilisation to a backward, depleted, restricted
and primitive subset.

Although some foreign cultures are 'enriching' and bring new artforms etc, Islam is culturally
impoverishing. All it can do is take away our liberty and restrict our
freedom of expression.

Islam is medieval. We've been there, done that, rejected all that theocratic crap, then progressed through the
Renaissance and Enlightenment and left Islam in the dust.

Now to a certain extent this is true. Wherever the Chinese settle you get Chinatowns, which become tourist attractions. In
contrast, wherever the Jihadists settle you have ghettoes which become
no-go areas. Obviously, some groups are more vibrant than others.

So what have the Muslims contributed to our cultural enrichment?
Zero? - no, the number 0 was a Hindu invention.

In fact they have contributed less than zero, they have a negative effect on all aspects of society.

Islam is a moribund culture that has produced nothing of any significance to
the rest of the world for the past five hundred years, with the one
exception of the new cinematic genre of 'Jihad-Snuff' videos, showing now at a mosque near you.

Islamists have a deleterious effect on education, with attempts to rewrite
history so that the Muslims are given credit for inventing everything,
and aggressive demands to ban music, visual arts and drama from the
syllabus.

There's the old joke about the difference between the Islamic world and a pot of yoghurt, but it's beyond a joke when they
try to impose their repressed and culturally barren stone-age culture on our kids.

They have disrupted our once civilised society. They have made air travel
into even more of a nightmare than it was. They have flooded the
country with heroin.

Kuffar teenagers in enriched areas are scared to go out in case boys get attacked by gangs of 'Street Jihadists' and girls by gang rapists. Even young children are vulnerable to Islamic paedophile gangs.

They have destroyed free speech. We can no longer discuss religion without being arrested. They have given our control-freak government the perfect excuse to increase their surveillance into everybody's lives.

Unlike the far eastern cultures, which have contributed martial arts, visual
arts, meditative techniques and so on, Islam has contributed nothing.
They are so backwards they cannot create anything new. Their toxic
combination of ignorance with aggressive arrogance can only destroy
cherished aspects of our traditional culture.

Everything they touch turns to Shi'ite.

But there is one completely new cultural practice: mufa'khathat or thighing of children - they're just following the example set by 'The Perfect Man'